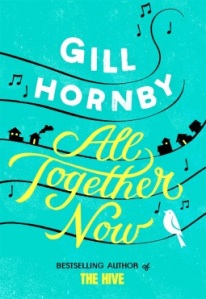 Thanks to NetGalley and Little, Brown for the ARC of this book.

I picked up this book because I am a fan of the author’s brother, Nick Hornby, and her husband, Robert Harris, so I had high hopes of the quality of the writing. Unfortunately I was disappointed. The book follows a series of lonely misfits in a small town who come together in the community choir and improve their lives, happiness and family relationships through the power of joining in and communal support.

With a plotline treading such familiar and predictable ground, the book either needed to be exceptionally funny or have particularly compelling characters in order to be successful. Unfortunately it has neither qualities.

The plot was also written by numbers with no twists or surprises and could be any number of other books I’ve read or films I’ve seen. In fact, the basic premise of an unlikely group of people drawn together by circumstance and becoming an extended supportive family is almost exactly the same as Nick Hornby’s book ‘A Long Way Down’, but his writing is much more accomplished and compelling and his observations about human relationships more piercing.

I really wanted to like this book, but it was just incredibly average and bland.

I listened to the audiobook version of this which is read by three narrators, one for each of the main characters. It’s very well read except for the occasional dodgy regional accent – Bill Irwin the American narrator really can’t do a northern English accent!

Nick Hornby is and incredibly readable author. I never fail to enjoy his books. He has an amazing ability to get right to the heart of human nature. His observations are spot-on and insightful, especially when it comes to feckless men and people who are obsessed by music. I really like how realistic and flawed his characters and their situations are.

Juliet, Naked is the story of Annie and Duncan, a boring couple who have been living a mundane life together for fifteen years. Duncan has an unhealthy obsession with obscure 80’s musician Tucker Crowe, which ends up driving their relationship apart. I was really glad when Annie got shot of Duncan, he is an idiot.

I found this book really came alive with the introduction of a chapter told from Tucker’s point of view. It was unexpected and rounded out the novel, which I felt would have been boring if we had just stuck with Annie and Duncan’s perspective. Tucker’s 6 year old son Jackson is a fantastic character, he is hilarious.

I love how this book is able to demonstrate the ordinariness of famous people compared with the expectations and speculation of their fans.

Juliet, Naked is not Hornby’s best book but it’s easy to read and enjoyable and I’m sure his fans would like it.